We do hope you have enjoyed this week’s characters as much as we have enjoyed writing them. The finale for the week (and we feel probably the one we have the most insight about) is the yachtie ‘widow’ girlfriend. With Tatler’s recently published Yacht Guide 2015 in mind, Real Riviera is taking another look at the yachting characters you might encounter in the industry – an industry like no other.

She usually works in recruitment, sales or marketing. A yachtie ‘widow’is usually a girlfriend who has either retired from yachting or discovered that being on a yacht isn’t quite for her so is working for a company within the yachting industry instead. She lives in her own place and her boyfriend wants to become a captain one day so she’d better stay involved in yachting. You might be asking why ‘widow’? It’s simply for the reason that in the summer, unfortunately or fortunately, her boyfriend is nowhere to be seen.

The yachtie girlfriend summers are filled with ladies’ lunches and dinners, cocktails, rosé, shopping trips, maybe a few more drinks and the occasional bit of work. She speaks with her man via messages at least five times a day, however, after three months apart the relationship becomes quite stagnant and the daily messages slowly dwindle to a few words a day: “I’m good/bored. Can’t wait to see you… Miss you. Love you.” That’s pretty much how it goes now. She typically dislikes looking at Facebook as it allows for her jealousy to boil over, but that constant need to check, stalk, and know his whereabouts 24/7 unfortunately requires rather a few regular Facebook checks (absolutely no refreshing of the page by this girlfriend – honestly!).

There is, of course, the occasional one or two days during the summer when she hears of a last minute change of plans and that he is coming home. They will get to spend a glorious and treasured 36 hours together. It is at this moment everything is dropped – all plans are cancelled and a quick trip to the salon (which you haven’t done in months) is necessary! Finally she is ready for a much needed romantic whirlwind trip! However, as always, the female hormones kick in and although she tries ever so hard not to pick a fight alas there have been things niggling away at her (i.e. clothes strewn everywhere, toilet seat up, kitchen a mess all of a sudden now he’s home not to mention the girls on Facebook with their arms draped over him) and she has to get them off her chest. It is at this exact moment everything that she has been bottling for the last few months explodes!

Once the flames have been put out and the arguing comes to a halt, she realises she has wasted the last 36 hours fighting before he leaves again for another two months. So she calls her BFFs and heads for a rosé lunch on a beach in Juan-les-Pins where they then discuss at length what went wrong. How could she have been different? They drink, analyse and discuss. Although little is resolved, more wine is poured and she does think to herself… Was he in the wrong or me? “It must be him,” she thinks as she reaches for the last bit of the now sandy bottle, “I am never in the wrong.”

For now, we feel we have divulged enough secrets about the yachting industry for one week. We have, of course, kept some secrets for later, which we look forward to sharing with you at a later date. The sun is shining and summer is just about here, and I know I am looking forward to a ladies’ lunch and rosé in the near future.


‘The writer’s views are his/her own and do not reflect the views of the company he/she works for.’ 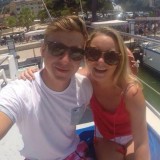 CazA typical Australian pursuing the dream of a never-ending summer. Caz's journey took her from her Sydney home to London before settling down on the Cote d’Azur. Spending one half of her year tanning with a rosé in hand and the other attempting to snowboard (rosé in hand also preferable), she enjoys the charmed life of a ‘Frenchie' and has a tendency to talk too much and write too little.

View all posts by Caz