Early one Sunday on passage from Dominica to Antigua the crew of Nefertiti heard voices coming from the water. Daniel Calascione describes a troubling rescue of four Haitian refugees 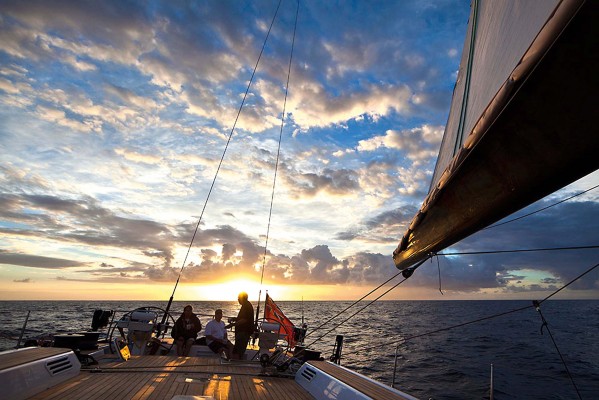 This Sunday was like no other for the Nefertiti crew. The four of us were unexpectedly and fundamentally affected by an experience that allowed a glimpse into the lives of the less fortunate and four other people had their destinies rewritten.

There is something special about waking up before the rest of the world to enjoy a few hours of extra time. In this case the feeling was amplified by the location: Dominica, a modern-day Garden of Eden. With overgrown rainforests, rivers, waterfalls and bubbling volcanic mud, Dominica is an enchanting island and one of the few in the Caribbean that Christopher Columbus would recognise if he were to return. The people are generally honest, healthy, happy and glow with a mineral-filled shine in their skin and smiles. The mangoes and avocados are huge and taste spectacular. The coconuts are orange and like no other with their sweet water and jelly nut properties.

We had been anchored in Portsmouth harbour on the north-west coast and the 0500 start was magical. We were heading to Antigua via Guadeloupe and had around 120 miles to cover. I woke up Christoph and we began the process of leaving – transom up, generator and engine on, lines tidied, main readied, nav lights on, coffee drunk and anchor up. As we came out of the bay we hoisted the Swan 90’s 280m2 mainsail and unfurled the big jib. Before we knew it we were cruising under sail at 12 knots on course. This boat just loves to go fast.

The stars were bright. It was still dark, though the faint glow of the rising sun was creeping through. Christoph and I were on deck by the wheel enjoying our watch. It was coming up to 0600 and we were about seven miles offshore between Dominica and Guadeloupe when we heard noises.

They were too faint to interrupt a conversation, but in the silence the sounds were clearly different from normal, definitely not the wind whistling through the rig.

We looked at each other and agreed they were unusual. As fast as they were there, they were gone; 12 knots of boat speed would do that. Christoph shouted into the emptiness and got nothing back. Amy, the chef, soon turned up on deck. The commotion struck a chord and we realised that whatever it was couldn’t be ignored, so we unanimously decided to furl the jib and gybe back. The wind was between 17 and 20 knots and the sea was no more than 2m.

At this point a faint glow started reflecting off the water and we assumed a course just below our track to allow for the ever-brightening light to shine on the most probable area from which the sound came. We heard it again.

Christoph fetched the binoculars and scanned the horizon to no avail. When we felt we had covered the area, we tacked back and started sailing on our course. Suddenly he shouted: “Off our starboard aft quarter, Dan! Four black spots on the horizon.” We tacked back and headed in the general direction. Emma, the stewardess, joined us. We had our quarry in sight and now knew we were dealing with people.

One boatlength away now. Four bodies clinging onto something submerged which we couldn’t seem to see.

As we closed the distance between us and them their screams became higher-pitched, more desperate, more penetrating. Their panic seemed to intensify with our approach, though an element of relief became apparent in their voices.
It became clear that they were clinging onto a semi-submerged small craft, probably no more than 15ft. It was an upturned wooden fishing boat, just hugging the surface as a result of the air trapped in the forward locker. We circled them to get a better idea of the situation, during which time they did not stop screaming.

I then needed to drive the boat back in the direction from which we came to allow for an accurate approach. This manoeuvre caused them to become more frantic as they thought we were leaving them.

Bow thruster down, transom opened, lifebuoy out, long line readied. The back of the boat was barely two metres from the sinking vessel and Christoph, Amy and Emma were ready to receive the crew. That was when we realised getting these people on board was not going to be that easy; they clearly did not know how to swim.

Christoph threw the lifebuoy accurately less than a foot away from them and two of them, almost reluctantly, released their grip on the boat and grabbed the ring.

We pulled them in and heaved their practically limp bodies aboard. Watching them collapse almost immediately is ingrained in my memory.

The gap between us and the other two survivors was quickly widening. Christoph threw the lifebuoy again, this time over their heads. They hesitantly grabbed the ring and lifelessly gave themselves to Christoph’s grip as he hauled them aboard. The desperation and fatigue in their eyes was masked by a clear surge of adrenalin.

Amy, Emma and Christoph instinctively turned into ‘Red Cross’, nursing the survivors with the utmost care: blankets, porridge, hot chocolate, water and dry clothes. As Christoph and the others were dressing our charges in dry kit, I was on the phone to a local contact in Dominica, the famous tour guide, Cobra. He assured me that he would be waiting for us with an official in Portsmouth.

The survivors themselves were in shock: two 17-year-old girls, a pregnant 22-year-old woman and a 19-year-old man, all migrants from Haiti. One of the younger girls had clearly been on the bottom of the pile of people clinging to the upturned boat, as her stomach was chafed raw by the wood. She needed to go to hospital.

It was fully light now as we started trying to dig for information about where they had come from and where they were headed. They were trying to communicate with us in a mixture of creole and French. We understood that the boat had been upside-down all night. They were heading to Guadeloupe in the hope of finding some work.

The local contact they had in Dominica would have taken all their money upon their arrival and kept them locked up for weeks with minimal food and water until the time was right to cross to Guadeloupe.

The most composed of the four was the pregnant woman. She told us in a few broken words that there had been five others and that they had drowned during the night. She tried to explain how the captain of the vessel, a local Dominican, had allegedly tried to drown all of them when the boat turned over in order not to get caught human trafficking. She alleged he punched her in the belly to try to get her to let go of the boat. When he realised he could not overpower them, the captain and his right-hand man floated away from the wreckage on a fuel drum.

Back in Portsmouth Cobra and a police officer came on board and started asking questions. Only after three hours of interrogation could our refugees be taken off the boat and sent to hospital.
In the meantime, the local coastguard had driven out to search the scene of the incident. They found no further survivors nor the upturned boat; however, they did find the two Dominicans clinging onto an empty drum of fuel. They were brought back for questioning and ultimately were prosecuted.

By midday we were upping anchor to continue our journey north to Antigua, leaving the turbulent mess of the rescue in our wake. The Haitians would remain in hospital until they recovered, and their troubles had only just begun.