On the border between Uruguay and Argentina, cruising the River Plate not only evinces fascinating political differences, but has some idiosyncratic weather conditions as well, finds Jill Dickin Schinas ‘South-easterly, Force 8,’ read the forecast. That wind was going to transform the adjacent coast and the entrance to the River Plate into a lee shore. But we decided that, rather than ducking into La Paloma, we would try to make Punta del Este, 50 miles away and more secure. Thus it was that, eight hours later we found ourselves fighting tooth and nail to keep from washing ashore on the Atlantic coast of Uruguay.

Having spent six months swanning around in Brazil, we had cringed at the thought of what might await us as we headed south – and we were right so to do. We’d gone from birthday suits, via T-shirts and shorts to jumpers and jeans, through to the full Arctic wardrobe.

The cold isn’t the only enemy in this part of the world. This bit of the ocean is notorious for its south-easterly gales and pamperos – violent squalls that can knock a boat down. We had already had three pamperos on our passage south, and in one the pressure had fallen 12mb in half an hour. 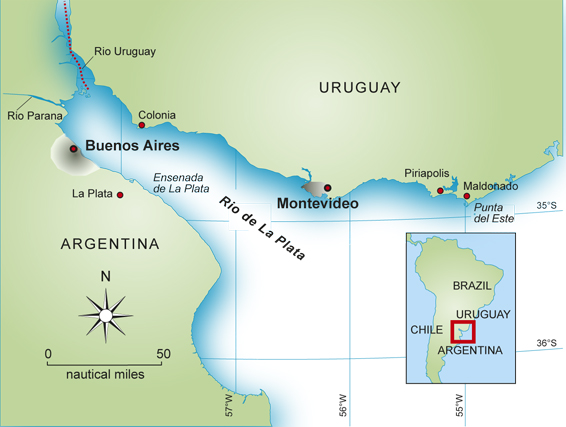 We had past experience of the Rio de la Plata (River Plate). Having visited it twice before, we already knew it is a tricky sort of a place which offers non-stop adventure. It occupies a position similar to the English Channel and, just as yachtsmen based on the south coast of Britain like to organise races and rallies to the French coast, so too our Argentinian peers enjoy popping over to Uruguay for the weekend.

However, whereas folks in the UK have only to deal with shipping lanes and the vessels trotting in an orderly fashion along those highways, our South American kin must cope with as many hazards as a game of snakes and ladders.

There are unmarked shoals, wrecks and a precarious network of channels, which requires round the clock attention from a fleet of dredgers. Throw in the fast ferries – one of which travels at 60 knots – and the constant procession of bulkers, car ships and container ships, and an outing on the Plate is likely to be challenging rather than relaxing.

Sailors also have to cope with a climate that tantrums between icy south-easterly gales, such as the one we encountered, and sweltering calms. Then there are the tides, which obey the wind rather than the moon. And then there’s the dreaded Prefectura, a quasi-military police who might decide to pay a visit. 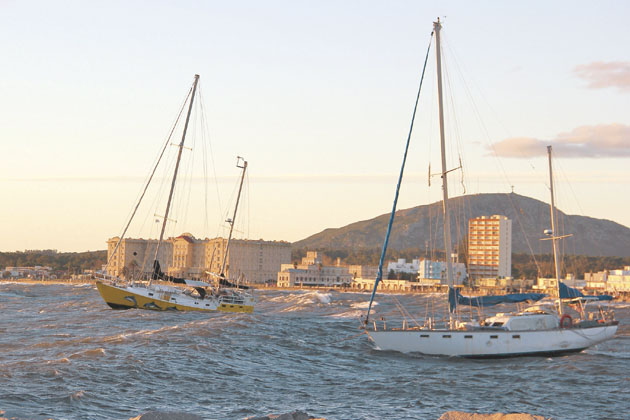 Riding out a gale of Piriapolis

By rights we should have been frightened, I suppose, as we clawed our way along in that gale, fighting to keep a two-mile offing from the shore. The water was cold and the waves smashing into Mollymawk’s bow would have pummelled us if the worst had come to pass, but we found it hard to be solemn because, besides being cold and dangerous, those waves were also shining!

Each one, as it broke, lit up the sails as if with a torch. And the ocean was a lurid, glow-in-the-dark plain. “If we wind up on the beach, what would it be like to swim in a phosphorescent sea?,” I wondered, “and to see one’s own body glowing like a ghoul?”

The first place you reach at the mouth of the River Plate is Punta del Este. Except for a short period at the height of the southern summer, it’s a cold and windy hole, but during that golden month it’s the Antibes of this region.

In olden times, sailing ships used to anchor about half a mile west of the punta, off Maldonado, but now the place has been taken over by Argentina’s rich and famous. A big sea wall juts out from the point itself and this provides shelter for a large marina created especially for the jet-set. Crawling into the bay with the sun, we cast barely a glance at the polished glassfibre and stainless steel. A berth in there would have cost us more than US$150 per night and so we anchored just outside. 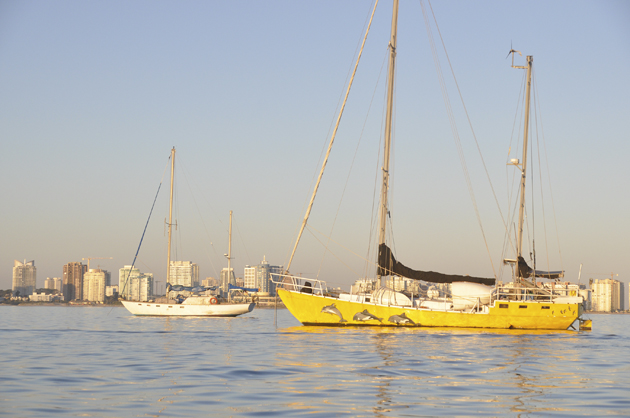 On rowing ashore to clear into the country we were immediately accosted by the Uruguayan Prefectura. “Stop here!” they barked. “You are not wearing lifejackets!”

For the next 15 minutes we waited obediently while the Prefectura stood guard over us. Eventually another officer sauntered up, with a pad of forms in his hand. Having heard that we had only just that moment set foot in the country, he decided to be lenient, warning that if this ever happened again the dinghy would be confiscated.

I cannot think of any other occasion when we have been made so spectacularly unwelcome in a country – yet for all this, the Uruguayans are not an aggressive people; they’re just accustomed to toeing the line. This is an orderly sort of a place, with tidy streets, clean houses, sober people and little evidence of any crime. Perhaps it’s because they’re all doped up to the eyeballs on maté, a super-strong herbal tea which is the national beverage, passion and pastime on both sides of the Plate.

The apparent concern over safety did not extend to the country’s roads. Uruguay has a live-and-let-die attitude towards road safety. Families of up to four people can be seen riding around the streets on motor scooters, without even the encumbrance of a crash helmet. 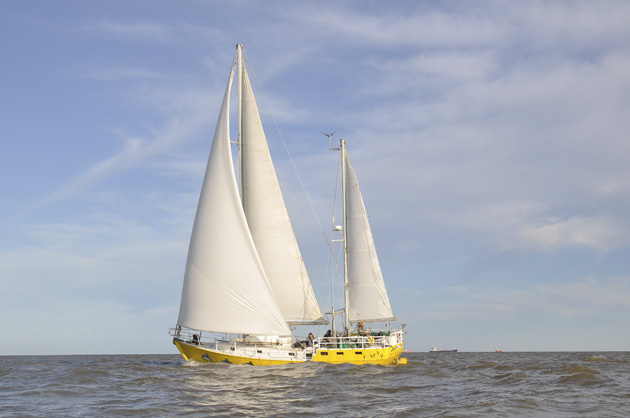 Mollymawk sailing on the River Plate

The Plate is not really a river at all; it’s an estuary. At the seaward end the waters are salty and are home to seals and marine fish, but above a certain very distinct line everything is fresh – fresh and brown. On the debit side, this means that the water pumped though the loo looks much like the stuff that you were pumping out, but on the other hand, it means that any marine fouling falls away.