On a headland outside the town Falmouth Coastguard station looks out to sea like a sentinel. Binoculars lie on the window ledge, but the days of watching, at least physically, are long gone. Inside the operations room, watch officers sit at two rows of desks. It could be any office apart from the air of calm and expectancy.

They wait. They listen. For anyone who ever needs to be rescued far out into the Atlantic – sometimes even on the other side of the world – this is where the race to help begins.

Maritime Rescue Co-ordination Centre (MRCC) Falmouth, aka Falmouth Coastguard, is one of the busiest rescue co-ordination centres in the world and one of the most efficient. On average, it handles six or seven distress calls every day, around 2,300 a year. 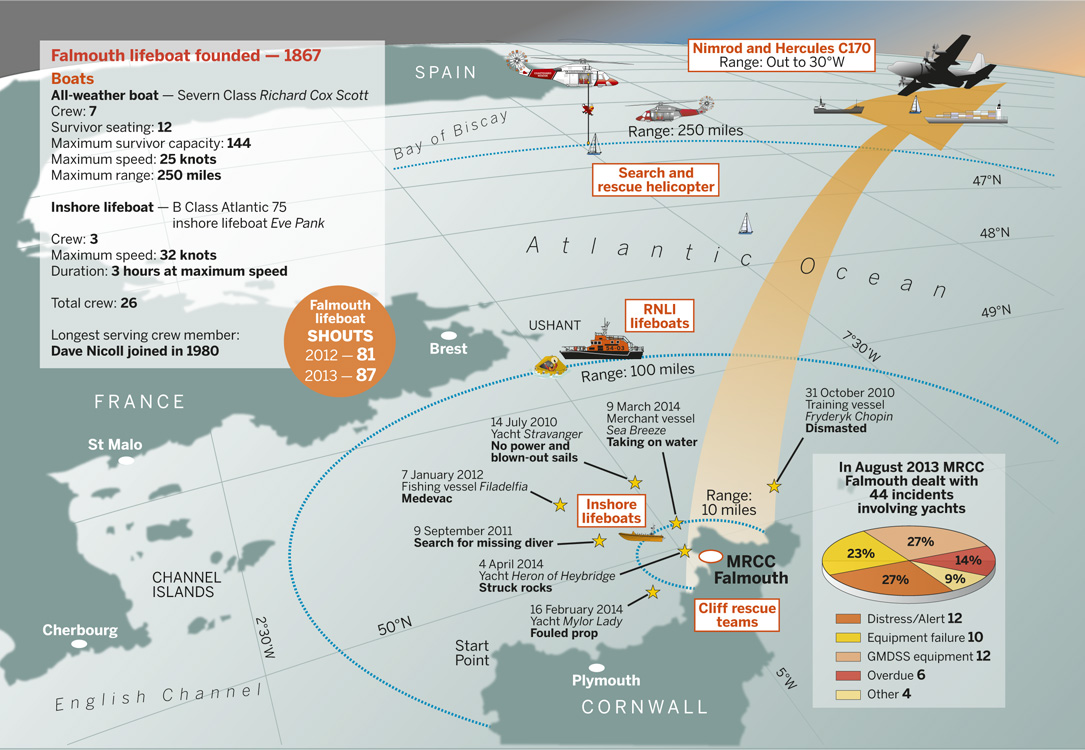 Their area of responsibility is dauntingly large: it reaches into the North Atlantic to 30°W and covers 660 square nautical miles of some of the world’s roughest seas and busiest shipping routes. They stand ready to act as saviour to anyone in trouble, from the walker whose dog has scampered over a cliff to cargo ships disabled or, as in one recent case, on fire 1,000 miles from land and with mounting casualties.

This extract was part of a feature on the rescue services – see also Matthew Sheahan’s day on excercise with the Falmouth RNLI lifeboat.

It’s mid-morning and watch officer Richy Williams is looking at his computer as a message crawls down the screen. It’s an EPIRB distress alert, the second of the morning. Alerts from any British-registered beacons come straight to Falmouth, regardless of where in the world they may be.

“A lot of what we do is detective work,” Williams says. The earlier distress alert came with so vague a position it could have been anywhere in Europe or North Africa, but the owner’s shore contact details were in the registry details, so Williams was able to solve the mystery with one phone call. The EPIRB was on a boat hauled out in the Channel Islands and had been activated inadvertently. Case closed.

This is different. Williams checks the registry database and draws a blank. “There’s nothing we can do now, only wait for more information,” he says. It could take an hour or two to resolve more precise co-ordinates. Precious time lost. Yet even when they get a position, Falmouth still won’t know what the vessel is, who’s on board, what comms they have or what the problem might be. They will have to operate blind. 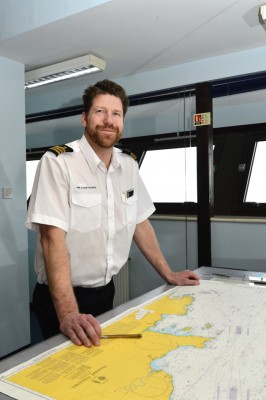 James Instance, manager of MRCC Falmouth, oversees what’s going on in the ops room. He is calm and businesslike, inspiring confidence, and like everyone here is proud to be part of a close-knit community of mariners, lifeboatmen, pilots and sailors who are ready to help each other. He manages 26 watch officers, who stand 12-hour shifts around the clock.

A lack of information about an alert, he says, “is one of the most frustrating things. Personal locator beacons and EPIRBs are so cheap and registering them is so easy. If you activate one [registered in the UK] we will be trying to find out within the hour what has happened and will put a rescue in place.”

Technology has changed and is still changing search and rescue. “Our work is not so much search any more as rescue. We’re trying to get the search out of it,” Instance says. The days of the crackling VHF Mayday are, by and large, over as more certain and wide-ranging means have taken over. But he says: “We’ll act on receipt of a distress by whatever means we get it. We’ve had Facebook rescues. Social media is dynamic and we might even know about an incident on a cruise ship by social media before the ship’s crew.”

Developments that will make rescues even quicker are not far away. “The greatest will be truly global mobile phones with live tracking that can call, be tracked and raise an alarm; single methods that could integrate with Facebook or a website to update live positions,” Instance says.

Yet rescue co-ordination is anything but a computerised business. There is an enormous element of human experience and persistence when rescues are complex or the information scanty. Falmouth Coastguard’s ops room is a testimony to this. A dynamic AIS screen of vessel movements in the Western Approaches is flanked by large wallcharts with magnetic markers and a whiteboard of the air, surface and coastal assets available.

Falmouth’s arsenal of rescue assets is impressive. It ranges from cliff rescue teams to inshore lifeboats, all-weather lifeboats, RAF and Royal Navy helicopters and, in rare cases, longer range aircraft that may not be able to airlift people out of danger, but can spot a casualty, establish communications, drop liferafts or emergency gear and provide top cover for rescue helicopter operating at the limits of their endurance. MRCC Falmouth also works alongside foreign rescue centres.

If a casualty is within 50 miles of the coast, a lifeboat is usually most appropriate. RNLI all-weather lifeboats can go much further, but such is the density of stations around the coasts of the UK and Ireland they rarely have to do so. In some cases, more than one lifeboat crew is tasked or might act in relay. Beyond that, up to 250 miles from shore, rescue helicopters are sent to airlift stricken crews. Further afield, it’s most likely to be another vessel that comes to your aid. “Help round the coast will come pretty quickly, but at 250 miles-plus offshore we run out of resources,” Instance says.

Out in the open ocean, other vessels are the only option. Centres such as Falmouth are able to locate a ship within a set radius of a casualty and ask the master to divert to assist. Satellite communications have made this much easier. Using a system called long-range information tracking, or LRIT, which collects position and other data worldwide from every vessel over 300 tonnes every six hours, it takes Falmouth just five minutes to plot which ships are best placed and to send an Inmarsat C Mayday relay to involve them in a rescue. “It is a legal obligation [for a master] to assist unless to do would put them in jeopardy,” Instance says.

Usually, Falmouth will task two or three of these ships, designating them ‘additional units’ in a rescue, to be used with any lifeboats or aircraft. Saving lives can come down to the expertise of the crew of some huge and unwieldy ship that, in itself, poses a risk and is perilous to board. “Recovery methods can be as sophisticated as a bucket on a rope or a scramble net if you’re lucky,” Instance says, “but I am always amazed at the skills of the master of an enormous car carrier who can put his ship alongside.”